How To Handle Images with GraphQL and the Gatsby Image API


The author selected /dev/color to receive a donation as part of the Write for DOnations program.

Handling images plays a pivotal role in building websites, but also can be challenging to deal with. Unoptimized images slow down websites, and many images that might look appropriate on a desktop are hard to scale down to a mobile device. Visually manipulating an image can also be tedious and difficult to maintain.

All of these problems in isolation are not a big issue. The main problem is when you have to keep track of all of these rules and image-scaling techniques. When it comes to Gatsby.js projects, this is where the Gatsby Image API comes in handy. By using GraphQL queries, you can use the Gatsby Image API to take care of image compression, make an image responsive, and even handle basic image styling.

In this tutorial, you are going to compress, transform, and style images using the Gatsby Image API and GraphQL queries.

In this first step, you are going to set up a new Gatsby project and familiarize yourself with the key image plugins that you’ll use throughout this tutorial. You will also download and set up an image to optimize throughout the tutorial.

First, use the CLI tool to start a new project named gatsby-image-project:

Once the project is created, move into the new project directory:

Next, open up the index.js file in a text editor of your choice:

Delete all of the code between the layout wrapper component so that your file is the same as the following:

Next, replace the deleted code with the following highlighted JSX, which adds some HTML elements to the website:

The Gatsby Image API will provide your new test image to the Image element in a later step. With this, you now have HTML to experiment with.

Later in the tutorial, you’ll revisit the index.js page. For now, save and exit the file.

The next file to open is gatsby-config.js. In this file, you will find the plugins responsible for processing images.

Open up the file with the following:

These plugins are as follows:

Now that you have an idea of which plugins are used to process images, close the file.

Next, add an image to your application to optimize, edit, and style later. In this tutorial, you are going to download an image from the Unsplash stock image website. Navigate to this picture of clothes on Unsplash in a browser and download the angela-bailey-jlo7Bf4tUoY-unsplash.jpg image into the /images folder of your Gatsby project. The image must be located in the right directory in order to query the image with GraphQL and transform it using Gatsby’s Image API.

Alternatively, you can download the image from the command line. First, move to the images directory:

Next, execute the following command:

This will use curl to download the image and output the file as angela-bailey-jlo7Bf4tUoY-unsplash.jpg.

In this section, you set up your Gatsby project to use Gatsby’s Image API. You explored the Gatsby configuration file to find gatsby-plugin-sharp, gatsby-transform-sharp, and gatsby-source-filesystem, which work together to optimize images. In the next step, you will test out querying and optimizing your image using GraphiQL, the GraphQL integrated development environment (IDE).

You are now going to query your new image using GraphQL. GraphQL is a query language for obtaining information from an API. It is also the data layer of Gatsby.

First, return to the root of your Gatsby project, then start the development server:

After your site finishes building, you will receive the following output:

This output contains two links. The first link, https://localhost:8000/, is where you can find your local development site. The second link, http://localhost:8000/___graphql, is the location of GraphiQL. GraphiQL is an integrated development editor (IDE) that allows you to make queries in the browser. This is a useful tool that helps you experiment and make data queries before you add them to your codebase. GraphiQL only works when you are running the development server.

With the help of GraphiQL, you can try out queries to retrieve your newly downloaded image. Open your browser and enter the GraphiQL URL http://localhost:8000/___graphql into the address bar. The browser will display the GraphiQL interface:

GraphiQL is split into three sections. To the far left is the Explorer, where you can find the fields that you are able to access via GraphQL. In the middle of the IDE is the sandbox where you make queries. Finally, to the far right you can find GraphQL’s documentation.

Your first goal is to query the angela-bailey-jlo7Bf4tUoY-unsplash.jpg image. Since the image is located in the local filesystem, you choose file in the Explorer box. This will show a dropdown menu of subdirectories. You will search for the image file by relative path, so select on relativePath. relativePath reveals another set of subfolders. You will enter the exact path of the image, so choose the eq for “equals”. Inside the quotes enter the path of the image angela-bailey-jlo7Bf4tUoY-unsplash.jpg. 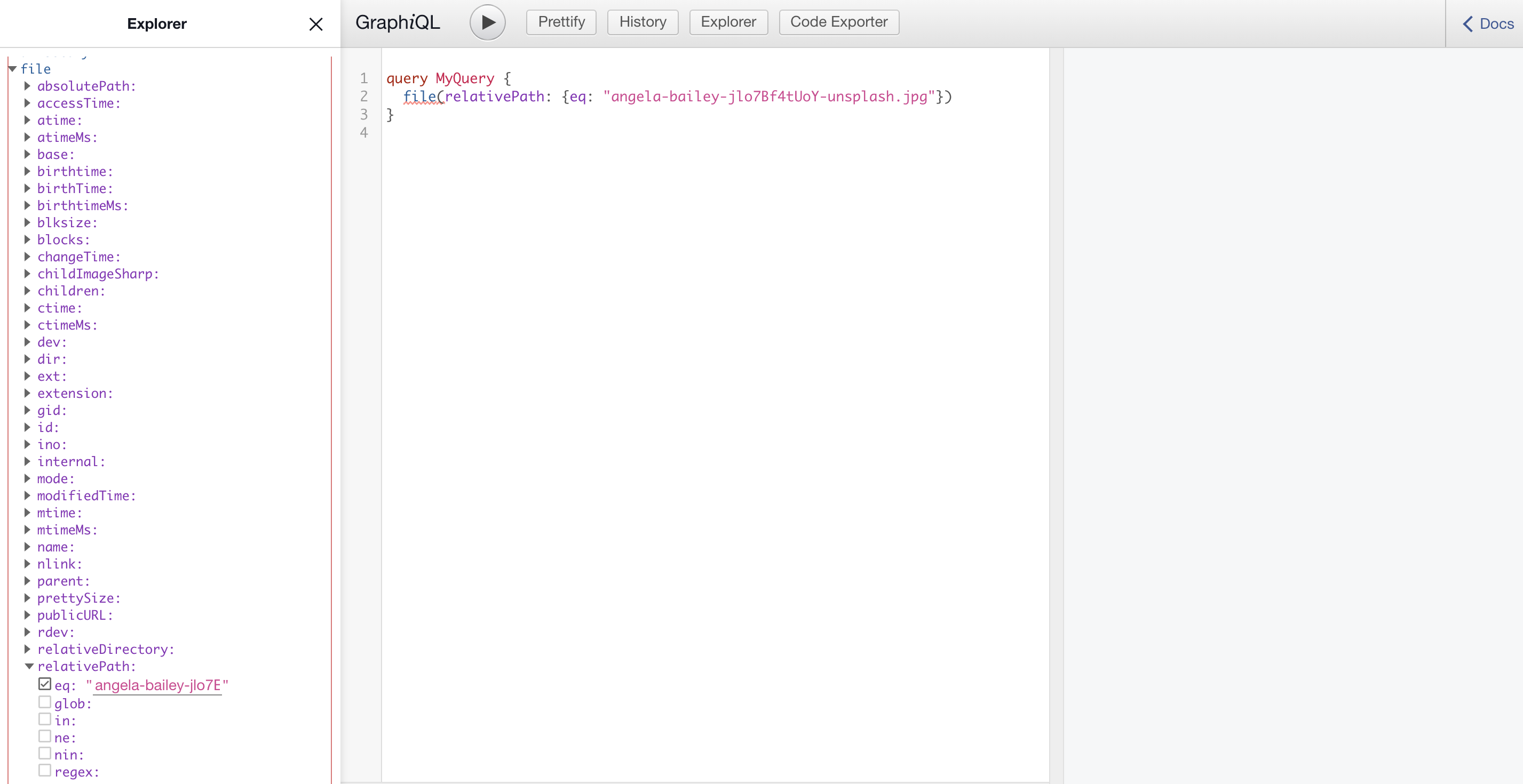 Now you are set to try out your first image manipulation. Your original image is 1920 by 1280 pixels. That is too big for your landing page, and it would help to make the image responsive. Normally, you would have to hard code the width into CSS and add media queries to make the image responsive. Gatsby’s Image API does all of that work for you, without you needing to write extra CSS.

Select childImageSharp in the Explorer box, which transforms the image under the hood. Make sure to choose this from the top-level menu, not from under file. Choose fluid from the next dropdown. A fluid image stretches to fill its container. In the dropdown options for fluid, check maxWidth and enter the 750.

The blue values just below the purple querying parameters are the different values you can return. Choose src and srcSet to return the location of the original and transformed image. Then click the play button to view the results: 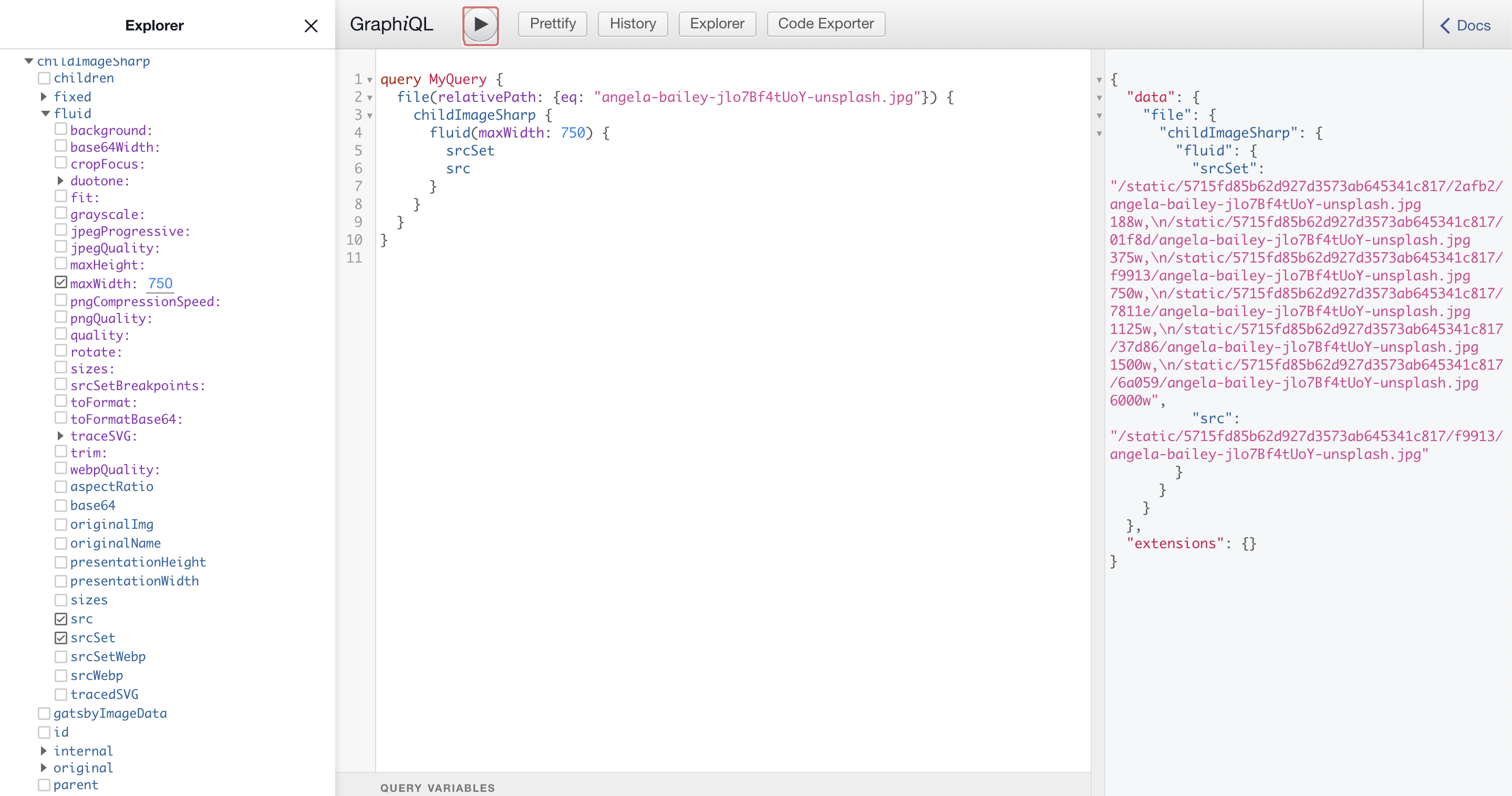 After selecting the parameters, GraphiQL builds the following query:

In the box on the right of the GraphiQL interface, you will find the return values. This will show:

You do not have to choose fluid in your query; you also have the option to choose fix. A fixed image creates responsive images 1x, 1.5x, and 2x pixel densities using the <picture> element. The following is an example of a fixed query:

This query will return the following:

In this query you have a fixed version of the image, with the crop focus set to center. Your return value is the location of the image and a set of different image sizes (1x, 1.5x, 2x respectively).

Now that you have tested out the GraphQL query using GraphiQL and the childImageSharp node, you will next add the queried image to a template and further optimize it using Gatsby’s Image API.

Step 3 — Optimizing Your Image’s Performance for the Web

In this section you are going to transfer your GraphQL image to the index.js page of your project and perform more image optimizations.

From your terminal in the root of your Gatsby project, open the image component in your favorite text editor:

Now, use the query that you tried out in the GraphiQL interface. Delete "gatsby-astronaut.png" and replace it with "angela-bailey-jlo7Bf4tUoY-unsplash.jpg". Also replace maxWidth: 300 with maxWidth: 750:

...GatsbyImageSharpFluid is a GraphQL fragment. This syntax allows you to obtain all of the different return values for childImageSharp and fluid. You will use this as the return value instead of src and srcSet.

In the image.js file, after the GraphQL query there is an if statement:

placeholderimage is the alias that is given in the query and returned in <Img fluid={data.placeholderImage.childImageSharp.fluid} />. In GraphQL you are able to name your queries. In the conditional statement, if you don’t have an image, then the words Picture not found will appear on the landing page.

Save and close this file.

Once you build your Gatsby site, the image will be processed and optimized by the Gatsby Image API. This will decrease the size of the image file to decrease loading time for your site. To test this out, navigate to the images directory to find the original file size:

Now list out the files with the following command:

The -sh flag will show you the memory size of the files in a human-readable format. You will receive the following output:

Without any optimization, the image is 4.8M. Now you will look at how big the image is after you’ve used Gatsby’s Image API.

Navigate to the root of your project and start the development server:

Once the development server has started, place the local address into the browser. Once the site has loaded, right-click the image and select Inspect. 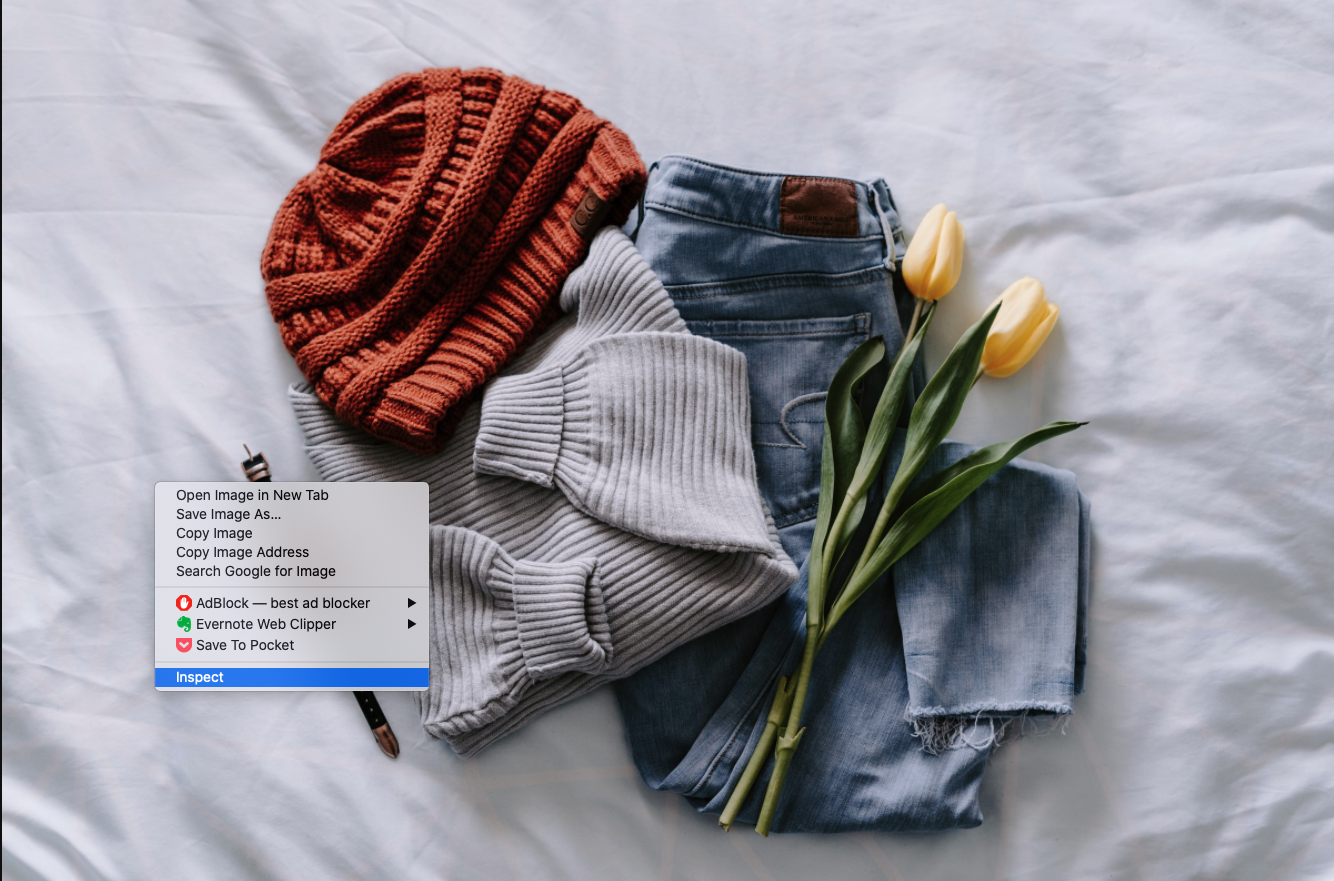 Now navigate to the Network tab of your browser’s developer tools. This tutorial will use Google Chrome DevTools:

Your image went from 4.8 MB to 68.4 kB. That is significantly smaller than if you hadn’t used the Gatsby Image API.

Note: If the HTTP status for the image request is 304, the image may be significantly smaller due to caching. To get a more reliable view of the image size, clear the cache and refresh the page.

Keep developer tools open and head over to the Elements tab. Hover over the image. You will find the HTML element <picture>...</picture> and its child <source>...</source>:

In the source tag, you can find the srcSet attribute (the same one you queried for in GraphQL). You will also find that the different heights and widths of the image were automatically generated. These different images ensure that angela-bailey-jlo7Bf4tUoY-unsplash.jpg is fluid, without needing to change CSS.

Note: While hovering over the image you might have noticed that the image is not keyboard-focusable, which could be an accessibility problem. If you want to learn more about accessibility, you can check out the Ally Project checklist.

In this section you used the GraphQL Image query in your Gatsby template. You also optimized angela-bailey-jlo7Bf4tUoY-unsplash.jpg without having to write extra CSS.

In the next section, you will visually transform the image by using childSharpImage.

Step 4 — Styling Your Image with childSharpImage

In this section, you will transform the look of angela-bailey-jlo7Bf4tUoY-unsplash.jpg with the help of childSharpImage. To test this, you will change your image to grayscale.

Open image.js in a text editor:

Go into your placeholderImage GraphQL query and inside of fluid set grayscale to true:

Go back to your terminal and restart the server. You will find your image changed using childImageSharp, without writing and maintaining unnecessary CSS: 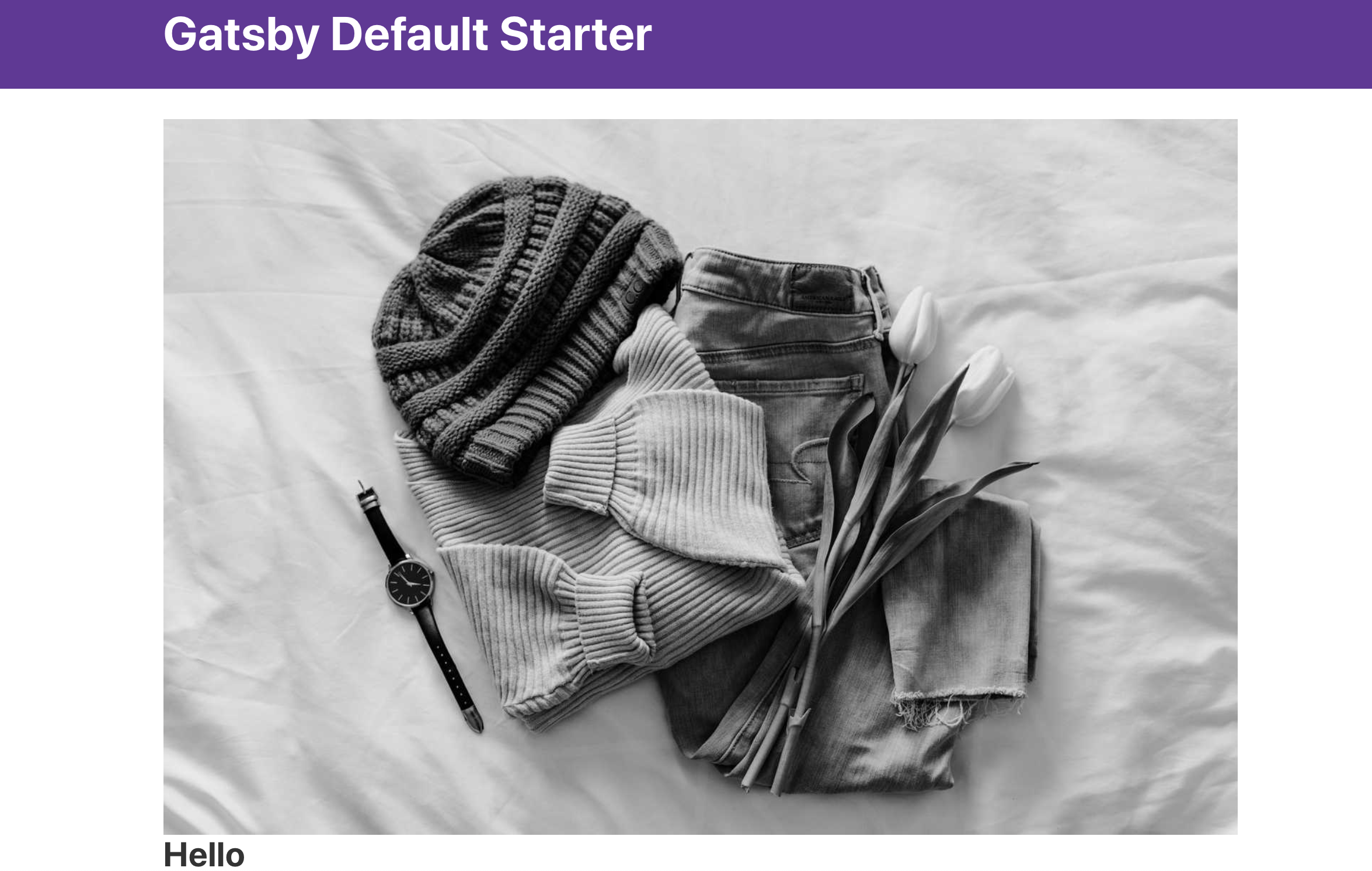 Grayscale is just one of the many ways you can process your image using childImageSharp. Go to Gatsby’s documentation if you are curious about the other childImageSharp props.

In this section you implemented grayscale by using childImageSharp. With this knowledge, you can perform many more image manipulations by leveraging the Gatsby Image API.

In this tutorial, you set your Gatsby project up to use the Gatsby Image API, query your Image using GraphQL, optimize your image’s performance, and style your image using childImageSharp. If you would like to learn more about Gatsby, check out the official Gatsby documentation.