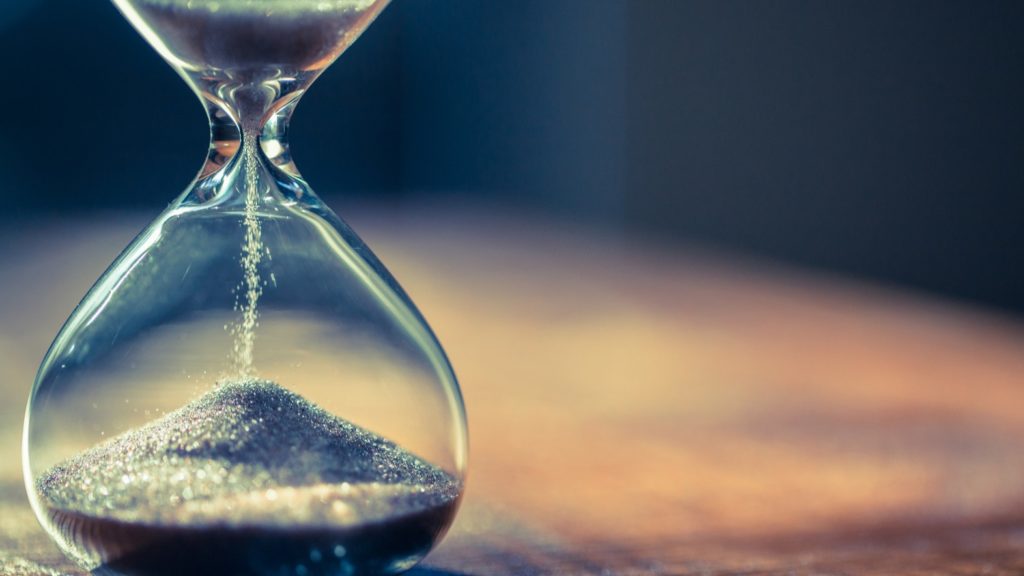 
If time is considered a finite resource, IT pros are feeling a shortage.

For INAP’s second annual State of IT Infrastructure Management report, we asked IT professionals to list the routine infrastructure activities taking too much and too little of their time. Once again, monitoring topped the “too much time” list, while designing and implementing new solutions ranked No. 1 in the “not enough time” category.

Overall, 59 percent of IT pros are frustrated by the time spent on routine infrastructure activities and 84 percent agreed that they “could bring more value to their organization if they spent less time on routine tasks”—up 7 points from 2018.

The survey was conducted late last year among 500 IT senior leaders and infrastructure managers in the United States and Canada. The margin of error was +/- 5 percent.

Participants also shared how often their personal time is interrupted and how they would spend their time if they were given 16 hours back to use as they please.

Check out the results below and download a copy of the full report here.

How IT Pros Spend (And Don’t Spend) Their Time

Here’s the full list of routine infrastructure activities alongside IT’s assessment of whether each is getting the attention it deserves. 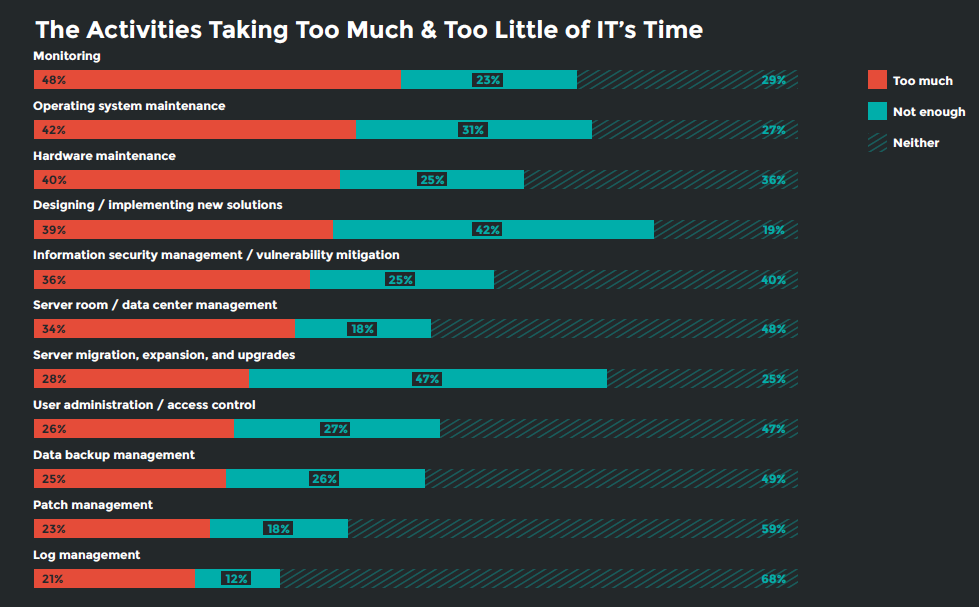 Only 23 percent of participants said they don’t spend enough time monitoring infrastructure, which is less than half the rate of those who consider this routine activity to be something that is eating into time that could be spent elsewhere (48 percent).

Operating system and hardware maintenance came in second and third, at 42 percent and 40 percent, respectively.

Nearly half (47 percent) of IT pros want to spend more time on designing and implementing new solutions, compared to 28 percent who already spend too much time.

IT pros remain polarized, as they were in the 2018 report, as to whether the amount of time spent securing their infrastructure is hitting the mark, with 39 percent saying it’s too much and 42 percent saying it’s not enough. Information security management/vulnerability migration is also the activity where the highest percentage of IT pros went one way or another on the issue, as only 19 percent fell into the “neither” category.

How IT Pros Would Like to Spend Their Time

Survey respondents say their personal time is disrupted by work responsibilities related to server and/or cloud infrastructure an average of 6.24 times per month—up slightly from 5.9 times in 2018’s report.

With so much time—on and off the clock—being dedicated to upkeep and maintenance, we once again asked, “What would you do if we gave you 16 hours back in your week?” 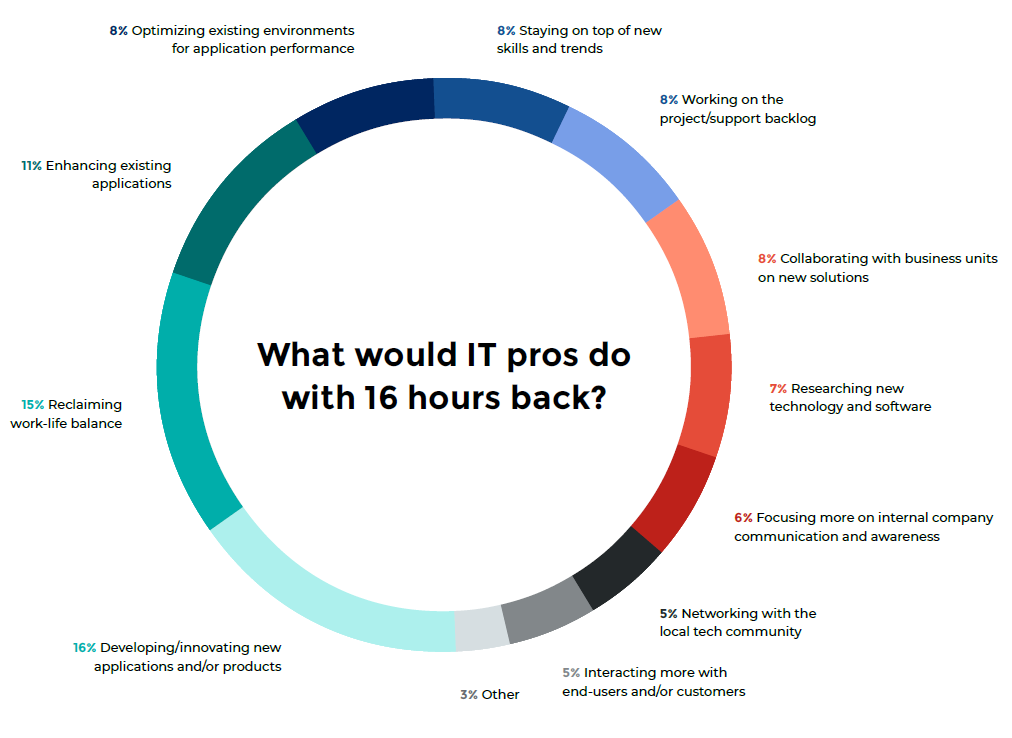 Application related answers make up three of the top four activities this year, with “enhancing existing applications” and “optimizing existing environments for application performance” coming in third and fourth, respectively. Reclaiming work-life balance fell to second, after claiming the top spot in 2018.

In the first annual State of IT Infrastructure Management report, IT pros noted that their departments are the key driver of their organization’s digital transformation initiatives, but they are spending too much time on routine tasks, focusing on functions that are “just keeping the lights on.” This sentiment continued in 2019. The list of activities noted in the chart above can be considered the opportunity costs of these routine tasks.

Have you read checked out our second annual State of IT Infrastructure Management report yet? If not, download a free copy and get your report card for the hybrid IT and multicloud era:

Here’s How Ad Tech Can Reduce Its Biggest Enemy: Latency


Editor’s note: This article was originally published Dec. 4, 2019 on Adweek.com.

Latency—the delay that occurs in communication over a network—remains the enemy of Ad Tech, and by extension, the enemy of publishers and agencies relying on increasingly sophisticated tools to drive revenue and engage audiences.

With real-time bidding demanding sub-100 millisecond response times, advertisers are careful to avoid any process that could hinder their ability to win placements. Website page-load speeds, meanwhile, continue to be a critical metric for publishers, as adding tracking pixels, tags and content reload tech to page code can inadvertently increase latency, and as a result, website bounce rates.

If you think a few dozen milliseconds here or there won’t tank user experience, note that the human brain is capable of processing images far faster than we previously thought. An image seen for as little as 13 milliseconds can be identified later, according to neuroscientists at MIT. The drive for greater speed and better performance will march on because users will demand it.

At its core, latency reduction—like the mechanics of transporting people—is governed by both physics and available technology. Unless a hyperloop breaks ground soon, you will likely never make a trip from Los Angeles to Chicago in two hours. It’s a similar story for the data traversing internet fiber optic cables across the globe. Even with a high-speed connection, your internet traffic is still bound by pesky principles like the speed of light.

So how are Ad Tech companies solving for latency?

The two most straightforward answers are to simply move data centers closer to users and exchanges, or move the media itself closer via Content Delivery Networks. The shorter the distance, the lower the latency.

A third, lesser-known tactic involves the use of internet route optimization technologies (first developed and patented by my company) that operate much like Waze or any other real-time traffic app you might use to shave minutes off your commute. Deploying this tech can significantly reduce latency, which in the programmatic and digital ad space, can be directly correlated to upticks in revenue.

To understand how it works, let’s first consider how most internet traffic reaches your laptops, smart phones, and (sigh . . .) your refrigerators, doorbells and washing machines.

Unlike the average consumer, companies increasingly choose to blend their bandwidth with multiple internet service providers. In effect, this creates a giant, interconnected road map linking providers to networks across the globe. In other words, the cat video du jour has many paths it can take to reach a single pair of captivated eyeballs.

This blended internet service has two very real benefits for enterprises: It allows internet traffic to have a greater chance of always finding its way to users and sends traffic by the shortest route.

In fact, the system routing internet traffic works less like real-time GPS routing and more like those unwieldy fold-out highway roadmaps that were a staple of many family road trips gone awry. They are an adequate tool for picking the shortest path from point A to point B, but can’t factor in traffic delays, lane closures, accidents or the likelihood of Dad deciding a dilapidated roadside motel in central Nebraska is the perfect place to stop for the day.

In much the same way, the default system guiding internet traffic selects a route based on the lowest number of network “hops” (think tollbooths or highway interchanges) as opposed to the route with lowest estimated latency. While the shortest path sometimes is the fastest, traffic is always changing. Congestion can throttle speeds. The cables carrying data can be accidentally severed, stopping traffic altogether. Human error can temporarily take down a data center or network routers. But unless someone intervenes, the system will keep sending your traffic through this path, to the detriment of your latency goals, and ultimately, your clients and end users.

Network route optimization technologies, conversely, manipulate this default system by probing every potential route data can take, diverting traffic away from routes with latency that kills user experience. While it is pretty easy for a company’s network engineering team to manually route traffic, it’s not practical at scale. The randomness and speed at which networks change mean even an always-on army of experts can’t beat an automation engine that makes millions of traffic optimizations per day.

Of course, latency is just one of many factors affecting the increasingly innovative Ad Tech space. For instance, services capable of intelligently delivering content users actually want to see is pretty important for all parties, too. And as an avid content consumer myself, I’m thankful more Ad Tech providers are turning their eyes toward the user experience.

But that’s all moot if industry leaders lose sight of the fact that milliseconds matter. And they matter a lot. Success in Ad Tech, as with any service powering the digital economy, is only as good as the data center technology and the network delivering the goods.